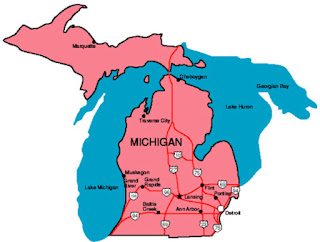 The Uniform Child Abduction Prevention Act is now in full force and effect in Michigan. The Michigan law reads as follows:


Sec. 7. (1) In determining whether there is a credible risk of abduction of a child, the court shall consider any evidence that the petitioner or respondent has done any of the following or that any of the following apply to the petitioner or respondent:
(a) Previously abducted or attempted to abduct the child.
(b) Threatened to abduct the child.
(c) Except for planning activities related to providing for the safety of a party or the child while avoiding or attempting to avoid domestic violence, recently engaged in activities that may indicate a planned abduction, including any of the following:
(i) Abandoning employment.
(ii) Selling a primary residence.
(iii) Terminating a lease.
(iv) Closing bank or other financial management accounts, liquidating assets, hiding or destroying financial documents, or conducting any unusual financial activities.
(v) Applying for a passport or visa or obtaining travel documents for the respondent, a family member, or the child.
(vi) Applying for or obtaining an enhanced driver license or enhanced official state personal identification card for the respondent, a family member, or the child.
(vii) Seeking to obtain the child's birth certificate or school or medical records.
(d) Engaged in domestic violence, stalking, or child abuse or neglect.
(e) Refused to follow a child-custody determination.
(f) Lacks strong familial, financial, emotional, or cultural ties to this state or the United States.
(g) Has strong familial, financial, emotional, or cultural ties to another state or country.
(h) Is likely to take the child to a country to which any of the following apply:
(i) The country is not a party to the Hague convention on the civil aspects of international child abduction and does not provide for the extradition of an abducting parent or for the return of an abducted child.
(ii) The country is a party to the Hague convention on the civil aspects of international child abduction but 1 or more of the following apply:
(A) The Hague convention on the civil aspects of international child abduction is not in force between the United States and the country.
(B) The country is noncompliant according to the most recent compliance report issued by the United States department of state.
(C) The country lacks legal mechanisms for immediately and effectively enforcing a return order under the Hague convention on the civil aspects of international child abduction.
(iii) The country poses a risk that the child's physical or emotional health or safety would be endangered in the country because of specific circumstances relating to the child or because of human rights violations committed against children.
(iv) The country has laws or practices that would do 1 or more of the following:
(A) Enable the respondent, without due cause, to prevent the petitioner from contacting the child.
(B) Restrict the petitioner from freely traveling to or exiting from the country because of the petitioner's gender, nationality, marital status, or religion.
(C) Restrict the child's ability legally to leave the country after the child reaches the age of majority because of the child's gender, nationality, or religion.
(v) The country is included by the United States department of state on a current list of state sponsors of terrorism.
(vi) The country does not have an official United States diplomatic presence in the country.
(vii) The country is engaged in active military action or war, including a civil war, to which the child may be exposed.
(i) Is undergoing a change in immigration or citizenship status that would adversely affect the respondent's ability to remain in the United States legally.
(j) Has had an application for United States citizenship denied.
(k) Has forged or presented misleading or false evidence on government forms or supporting documents to obtain or attempt to obtain a passport, a visa, travel documents, a social security card, a driver license, or other government-issued identification card or has made a misrepresentation to the United States government.
(l) Has used multiple names to attempt to mislead or defraud.
(m) Has engaged in any other conduct the court considers relevant to the risk of abduction.
(2) If the court finds during a hearing on a petition under this act that the respondent's conduct was intended to avoid domestic violence or imminent harm to the child or the respondent, the court shall not issue an abduction prevention order.
M.C.L.A. § 722.1528


Sec. 9. (1) If a petition under this act alleges and the court finds that there is a credible risk that the child is imminently likely to be wrongfully removed, the court may issue an ex parte warrant to take physical custody of the child.
(2) The respondent to a petition under subsection (1) shall be afforded an opportunity to be heard at the earliest possible time after the ex parte warrant is executed, but not later than the next judicial day unless a hearing on that date is impossible. If a hearing on the next judicial day is impossible, the court shall hold the hearing on the first judicial day possible.
(3) An ex parte warrant under subsection (1) to take physical custody of a child shall do all of the following:
(a) Recite the facts on which a determination of a credible risk of imminent wrongful removal of the child is based.
(b) Direct law enforcement officers to take physical custody of the child immediately.
(c) State the date and time for the hearing on the petition.
(d) Provide for the safe interim placement of the child pending further order of the court.
(4) If feasible, before issuing a warrant under this section and before determining the placement of the child after the warrant is executed, the court may order a search of the relevant databases of the national crime information center system and similar state databases to determine if either the petitioner or respondent has a history of domestic violence, stalking, or child abuse or neglect.
(5) A petition and warrant under this section shall be served on the respondent when or immediately after the child is taken into physical custody.
(6) A warrant to take physical custody of a child, issued by this state or another state, is enforceable throughout this state. If the court finds that a less intrusive remedy will not be effective, it may authorize law enforcement officers to enter private property to take physical custody of the child. If required by exigent circumstances, the court may authorize law enforcement officers to make a forcible entry at any hour.
(7) If the court finds, after a hearing, that a petitioner sought an ex parte warrant under subsection (1) for the purpose of harassment or in bad faith, the court may award the respondent reasonable attorney fees, costs, and expenses.
(8) This act does not affect the availability of relief allowed under other law of this state.
M.C.L.A. § 722.1530


Sec. 11. In applying and construing this uniform act, a court shall consider the need to promote uniformity of the law with respect to its subject matter among states that enact it.
M.C.L.A. § 722.1532


Sec. 12. This act modifies, limits, and supersedes the federal electronic signatures in global and national commerce act, 15 USC 7001 to 7031, but does not modify, limit, or supersede 15 USC 7001(c) or authorize electronic delivery of any of the notices described in 15 USC 7003(b).


This act is ordered to take immediate effect