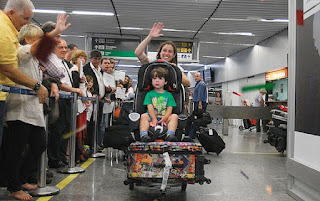 We are very pleased that, working with local counsel Jean-Paul Gallelli, we have secured the return of our client's child from California to Brazil under the Hague Abduction Convention, pursuant to a successful application to the Superior Court in Los Angeles.
Posted by Jeremy Morley at 7:28 AM

In a recent Nevada case, I was asked to testify as an expert concerning the risk of a child's international travel to Bali, Indonesia. The Nevada Court relied upon my expert testimony as to Indonesian law and practices concerning child abduction. Indonesia is not a signatory to the Hague Convention on International Child Abduction, and if the court allowed the father to take his two minor children there, the only available recourse to the mother would have been through the Indonesian courts in the event of a wrongful retention.


My testimony was well accepted by the court, and referenced throughout the written opinion. The following are selected excerpts:

“In support of Mother’s concerns, she attached the affidavit of Jeremy D. Morley, a prestigious international family law attorney, wherein Mr. Morley described several child custody matters he has handled involving Indonesia. Mr. Morley opined that Indonesia did not comply with international norms for the return of abducted children and noted that parental child abduction is not a crime under Indonesian law. Mother drew attention to Mr. Morley’s discussion of the implications of the children’s dual nationalities, as dual citizenship could hamper the U.S. Embassy’s ability to protect the children.”

“Based upon the Court’s concerns regarding Indonesia’s status as a non-signatory to the Hague Convention, the implications of the children’s dual citizenship, evidence of Father’s lack of significant ties to Reno, and in consideration of Mr. Morley’s Affidavit, the Court does not find that good cause exists to allow the children to travel with Father to Bali.”

Once again, this case shows that the many countries who have not signed the Hague Convention on international child abduction and who do not have an independent and reliable family law system are doing a disservice to their own citizens.

Since the Indonesian legal system cannot be relied upon to return internationally abducted children, courts should be wary of permitting a child's travel there, if the potentially left-behind parent objects.