This would be a major step forward in the prevention of international child abduction.

Korea is moving to sign an international treaty to protect children against parental abuse and possible abduction in cases of multi-cultural marriage breakdown.

A government source said the nation is inching closer to joining the 1980 Hague Convention on the Civil Aspects of Child Abduction.

The multilateral treaty signed by 81 countries provides a mechanism that ensures the prompt return of children taken to another country by a divorced parent seeking a court ruling in their favor.

"Korea has long been mulling the signing of the treaty to counter international custody disputes, which have been on the rise because of an increase in the number of multi-cultural marriages, and the unstable economy," the source said.

The Ministry of Justice and the Ministry for Health, Welfare and Family Affairs have been reviewing the issue.

According to U.S. Department of State officials, more than 1,000 American children were abducted and taken to a foreign country by a parent in 2008, up from 642 in 2005.

It is tough and complex to repatriate a child from countries that have not signed the pact such as Korea, Japan and the Philippines, as court rulings in previous jurisdictions can easily be overturned.

The U.S. State Department warns on its Web site over possible custody disputes with Korea.

"Custody orders and judgments of foreign courts are not enforceable directly under Korean law," it says.

The firestorm of publicity that we generated concerning the case of my client, Chris Savoie, whose kids were abducted to Japan by their Japanese mother, has now led to an official demand by eight countries that Japan stop its practice of providing a safe haven for international child abduction.

In order to generate concern about my client's plight I appeared on the NBC Today Show twice, CBS’ Morning Show, CNN's American Morning, CNN’s Anderson Cooper, CNN’s Situation Room with Wolf Blitzer, Headline News, and a host of other shows and I was interviewed at length by newspaper reporters in the U.S. and Japan.

The interviews with the Japanese media were especially difficult because the world-views of the Japanese reporters were fundamentally different those of Western reporters. The Japanese reporters' starting position was that of supporting the wishes of a Japanese mother to return home to Japan. It was essential to provide them with the documentary evidence that showed that the mother had brought the children to the United States knowing that she would be divorcing her husband and that established that she had received a very large cash settlement in the divorce case in return for committing to stay in Tennessee with the children and allowing the father to have extensive time with the kids.

I personally have consulted with approximately one hundred left-behind parents in the United States, England, Canada and other countries whose children have been abducted to Japan by a Japanese parent (or other family member). Once they are taken there they are never returned unless the taking parent herself has a change of heart. And because the Japanese legal system does not provide for sharing of parenting time, the left-behind parent at the very best can hope to eventually see his children for a few visits of only one or two hours, only in Japan and only in a supervised courthouse room or possibly in a coffee shop with a guard posted at the entrance.

A useful result of the publicity is that judges in the United States and other countries with a desire to prevent child abduction will hopefully never again naïvely trust that a Japanese parent’s promise to return her children after a family visit to Japan will be fulfilled or enforced.

Nonetheless, it is incumbent on lawyers representing potentially left-behind parents to help the U.S. courts by providing expert evidence in admissible form to support these claims. In seeking to restrain or enjoin travel with a child to Japan it is bad practice to fail to provide the court with such expert testimony or other admissible expert evidence. It is not good enough to rely on news reports; admissible expert evidence is required.
Below is one of many articles concerning the diplomatic effort to solve this problem.

TOKYO (AFP) – Eight countries on Friday called on Tokyo to allow divorced foreign parents access to their children living in Japan and to sign a treaty against international parental child abductions.

The group urged Japan to ensure that, when an international couple divorces, the foreign parent is not denied access to the child, something that activists say has happened in thousands of cases in the country.

The long-simmering issue was thrown into stark focus when Japanese police last month arrested a US man after he snatched his two children from his Japanese ex-wife on their way to school and took them to an American consulate.

The Tennessee man, Christopher Savoie, 38, who was released Thursday, said he had tried to take his children in an act of desperation after his Japanese wife took them away from their US home and denied him access to them.

The case highlighted the common practice of Japanese courts awarding child custody in divorce cases to just one parent, usually the mother, rather than reaching joint custody agreements with parental visitation rights.

Japanese courts also habitually side with the Japanese parent in an international custody dispute -- sometimes even awarding a child's Japanese grandparents, rather than a foreign parent, the custody rights.

Japan, alone among G7 countries, has not signed the 1980 Hague Convention on the Civil Aspects of International Child Abduction, which obliges countries to return a child wrongfully kept there to their country of habitual residence.

"Japan is a modern country with a completely backward family law," said US lawyer Paul Wong, whose daughter was taken into the custody of his former Japanese parents-in-law after his ex-wife died of cancer.

"Japan is the only country that has never returned a child to a foreign parent of any country. Ever. It is nothing but discrimination," added Wong, who works on the issue with the US State Department.

US Ambassador John Roos said in the meeting that his country is aware of 82 child abduction cases affecting US citizens, involving 123 children, while the French delegation said it knew of 35 cases involving its nationals.

"Our priority is to preserve the children?s interests as well as their rights to grow up in a stable and safe environment, with access to both parents and both cultures," said French Ambassador Philippe Faure.

In the Savoie case, a Tennessee court found earlier this year that his former wife Noriko had kidnapped and taken to Japan their eight-year-old son and six-year-old daughter and issued an arrest warrant for her.

However, that ruling carried no legal weight in Japan.

Savoie was arrested on September 28 outside the US consulate in Japan's southwestern Fukuoka city on suspicion of kidnapping, but he was released by prosecutors on Thursday without charges being filed.

Activist groups say they hope that Japan's new government -- which took power last month after more than half a century of almost unbroken conservative rule -- will review the issue.
Chiba, the justice minister, voiced sympathy for the concern raised but said she would have to discuss the matter with other members of the government, according to participants at the meeting.

Foreign Minister Katsuya Okada said the government "is studying the possibility" of signing the Hague onvention, adding: "Personally I believe Japan should consider this proactively."
Posted by Jeremy Morley at 7:38 AM 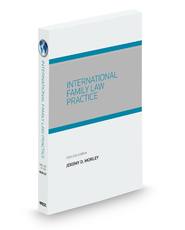 My book, International Family Law Practice, has now been published.