SLOVAK VIOLATION OF HAGUE ABDUCTION CONVENTION: Using Court Delays and other Judicial Devices to Block the Return of Abducted Children 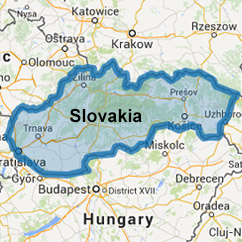 by Jeremy Morley
It is of the essence of the Hague Abduction Convention that cases brought under it should be handled and concluded expeditiously. The target of six weeks set forth in the Convention itself is made even more specific in the Brussels II bis Regulation governing abductions within the European Union. Unfortunately, lengthy judicial delays often occur, sometimes by reason of the abductor’s strategic litigation ploys and in some cases because of courts are overburdened or possibly negligent.

In some such cases the judicial delays then provide the purported basis for courts to overturn prior orders that children should be returned to the countries from which they were abducted.

That occurred in the infamous decision of the Osaka High Court earlier this year in the case of Arimitsu v. Cook. In that four children were abducted to Japan from Texas in 2014. The Osaka Court ruled in 2016 that the children should be returned. The authorities then failed and refused to implement the court order, and the Osaka court ultimately overturned the return order on the ground that circumstances had meanwhile changed sufficiently to require it to do so. See my article, Japanese Violation of the Hague Abduction Convention.

For similar reasons, the European Court of Human Rights has just ruled in the case of Mansour v. Slovakia (judgment dated November 21, 2017) that the Slovak Republic violated a left-behind father’s human rights in failing to return children abducted from Ireland.

The parties, both Slovak nationals, lived throughout their marriage in Ireland, where their two children were born and always lived. The mother took the children to the Slovak Republic in early 2011 and refused to return them. The father promptly brought suit under the Brussels II bis Regulation and the Hague Convention and succeeded in winning a return order from the Bratislava I District Court and after the mother’s appeal from the Bratislava Regional Court. The return order was enforceable in July 2011, but it was never enforced.


The father applied for judicial enforcement of the order in February 2012, but the proceedings were stayed because the mother had lodged a request – ultimately unsuccessful - with the Prosecutor General for an extraordinary appeal against the order.
A series of further appeals and litigation claims were then made by the mother. The mother had commenced proceedings for custody of the children in the Slovak Republic and an interim order issued in that case provided the pretext for another District Court to overturn the return order. The father applied to the Constitutional Court to reinstate the return order and that Court ultimately ruled in 2014 that the father’s rights had been arbitrarily and improperly violated by the District Court’s decision.

Thereafter the enforcement proceedings resumed before the Regional Court, which heard the case in August 2015. It acknowledged that it was bound by the Constitutional Court’s judgment. However, regarding the considerable length of time that had elapsed, it deemed it necessary to assess afresh all the circumstances decisive for the enforcement of the return order, such as the children’s whereabouts, their health, and the possibility of their returning to Ireland. It therefore quashed the District Court’s decision under appeal and remitted the matter to it for re-examination.

In April 2016 the District Court again declared that enforcement of the order was impermissible. It relied on medical reports concerning the children’s health, a psychological report referring to negative consequences for them if they were separated from the mother and an opinion from a court-appointed guardian about the stable family environment they had while living with their mother. It also took into account the children’s wish to stay with their mother and her new husband, their social ties in Slovakia (where they had been residing since January 2011), and the applicant’s lack of contact with them while in Slovakia.

The father then brought another case to the Constitutional Court which ultimately ruled that the father’s rights had again been violated. It found that the District Court had proceeded with the matter for more than four years (inefficiently) and that it was precisely the passage of time which had led the District Court to dismiss enforcement of the return order. It reproached the District Court for the inadequate way it had dealt with the mother’s procedural requests. It further stressed the particular nature of the enforcement of such return orders and pointed out that they required prompt and efficient decision-making that was in accordance with international standards.

For obvious reasons, the European Court has now ruled that the Slovak Republic’s conduct has been deficient and in violation of human rights. It has held that, “The enforcement courts, by a wrongful application of the substantive law and because of the excessive length of the proceedings, which moreover took place in a legal framework allowing for the use in a problematic way of an extraordinary remedy, enabled the issue of the return of the applicant’s children to the country of their habitual residence effectively to be resolved in an unendorsed and unsupervised way by the passage of time, rather than by a judicial decision.”

Unfortunately, the European Court had no power to order a return of the children. All it could do was to issue a judgment that determines that a violation of the European Convention on Human Rights had occurred and to order the Slovak Republic to pay some nominal funds to the father.

Thus, although the legal systems of the Slovak Republic and the European Court devoted a massive amount of resources to the case, a totally unjust result ensued. Indeed, the Slovak legal system was itself a key actor in a successful scheme to retain abducted children in the Slovak Republic in violation of the Hague Convention as well as the E.U. Regulation in violation of the fundamental rights of children to be with their father and of a father to be with his children.
Posted by Jeremy Morley at 12:04 PM