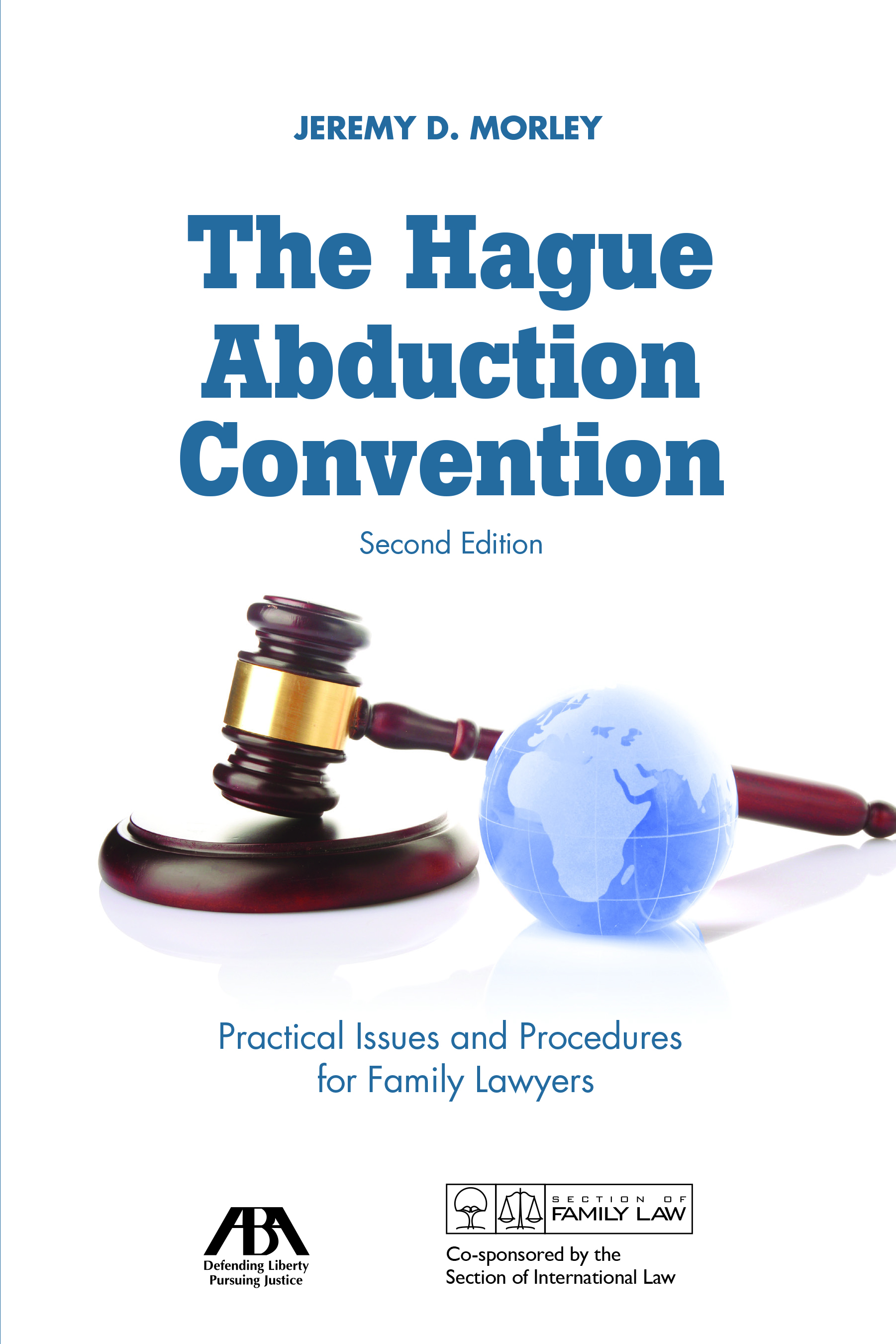 The Hague Abduction Convention, Second Edition, provides a clear explanation of how the Hague Convention on the Civil Aspects of International Child Abduction works in the United States.
Hague cases require an intimate knowledge of the Convention and of the voluminous case law that has developed around it.  Hague cases also require a complete understanding of international child custody law in general and in particular, for U.S. practitioners, of the relationship between The Hague Convention and the Uniform Child Custody Jurisdiction & Enforcement Act.


The Convention operates in the U.S. in ways that differ from those in other Hague countries.  This is because of the federal legislation that implements the treaty, the concurrence of federal and state jurisdiction, the lack of a specialized group of judges who handle cases under the Convention, the uniform state legislation on child custody jurisdiction, and a host of other factors.


Purpose of the Book
The purpose of the book is to explain as clearly as possible to family lawyers how the Hague Convention on the Civil Aspects of International Child Abduction works in the United States. The Convention operates in this country in ways that are different than in other Hague countries. This is because of the federal legislation that implements the treaty, the concurrence of federal and state jurisdiction, the lack of a specialized group of judges who handle cases under the Convention, the uniform state legislation on child custody jurisdiction and a host of other factors.
Voluminous Litigation
The treaty itself is short and to the point. Indeed, there are only three articles that legal practitioners really use to any significant degree in the vast majority of Hague cases, these being Articles 3, 12 and 13. Yet the Convention has spawned voluminous litigation, most especially in the United States. There are several reasons for that.


·                    The key terms in the Convention are ambiguous and either completely or mostly undefined. One might at first glance expect that straightforward terms such as “habitual residence,” “rights of custody,” and even “grave risk” might be easy to apply in a consistent manner. That has proven not to be the case. The key terms have been subjected to a cascade of judicial interpretation in the United States, which has sometimes been contradictory and often confusing.


·                    The Supreme Court has never ruled on the key issue in most Hague Convention cases, which is that of determining the “habitual residence” of the child. The treaty is supposed to have one autonomous meaning on a global level, but the common law system, which allows interpretation to develop on a case-by-case basis, seems not to work so well when decisions are supposed to yield a consensus in an international environment. The situation is rendered far worse than one might have expected because the U.S. Supreme Court has declined to handle all but one case. This has allowed the federal circuits to go off in various directions, with no guidance from the only court that could “lay down the law.”


·                    Even though the treaty is intended to be merely procedural in nature, parents who have brought their children to another country in search of a “better” forum than the ones available in the former residence may be desperate to prevent the children – and the cases concerning the custody of their children – from being sent back to that foreign forum. Likewise the parents of children who have been snatched by the other parent may be just as desperate to have the “home court advantage” of having their child custody case being heard “at home” instead of “away.” The differences between the custody decisions that are rendered in the courts of different countries are theoretically minimal, yet parents suspect – sometimes misguidedly, but often with extremely good reason – that in the real world the outcomes will be completely different depending on which country’s courts decide the case.


·                    When children are the subject of international family law disputes, the challenges are often great and the emotions generally run high. Simply put, money can be divided but children cannot. Divorcing parents who stay in the same town can often make sensible arrangements to share the parenting of their children, and if they cannot, a local court can issue appropriate orders and also enforce them as needed. But when the parents cannot even agree on which country to live in, all bets are off. Consequently Hague cases are often litigated.


·                    Neither the Convention nor the International Child Abduction Remedies Act which brought the Convention into U.S. law, contains any provision for mediation. Currently attempts are under way to implement programs for mediation of Hague cases but they are not yet much utilized. There are special challenges to the use of mediation in Hague cases because the cases are required to be concluded with great speed and a petitioner generally does not want to yield on that and the opportunities for compromise are limited in this area because a child can realistically live in only one country at a time.
Handling Hague Cases
Handling Hague abduction cases is challenging and fulfilling. Hague cases are usually tried very quickly. Indeed, they are supposed to be entirely concluded within just six weeks. They require an intimate knowledge of the Convention and of the voluminous case law that has developed around it. They also require a complete understanding of international child custody law in general and in particular, for U.S. practitioners, of the relationship between the Hague Convention and the Uniform Child Custody Jurisdiction & Enforcement Act.


The Convention is misunderstood by very many family lawyers and, dare I say it, by family judges. A lawyer in a Hague case sometimes needs to provide a quick but respectful education to judges who have not handled any or many such cases before.


I have had the good fortune to have handled Hague cases in many jurisdictions throughout the United States and sometimes in foreign countries also, usually working collaboratively with local lawyers in each jurisdiction. I have also submitted expert evidence in many cases around the world where compliance with the Convention, either past or contemplated, has been an issue. Additionally, I have lectured on the Convention before federal and state judges in New York State, at international conferences of family law practitioners and at venues such as the Foreign Ministry of Japan. It is fulfilling and exciting work.
Posted by Jeremy Morley at 8:37 AM