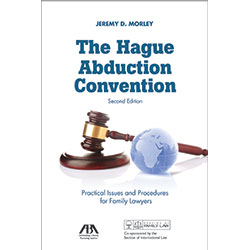 The Second Edition of my book, The Hague Abduction Convention: Practical Issues and Procedures for Family Lawyers, has just been released.  Read below for some info about the book, and follow the link at the bottom of this post to purchase the Second Edition.


Handling Hague abduction cases is challenging and fulfilling. Although Hague cases are tried very quickly, they still require an intimate knowledge of the Convention and of the voluminous case law that has developed around it.  Hague cases also require a complete understanding of international child custody law in general and in particular, for U.S. practitioners, of the relationship between The Hague Convention and the Uniform Child Custody Jurisdiction & Enforcement Act.
The Convention operates in the U.S. in ways that differ from those in other Hague countries.  This is because of the federal legislation that implements the treaty, the concurrence of federal and state jurisdiction, the lack of a specialized group of judges who handle cases under the Convention, the uniform state legislation on child custody jurisdiction, and a host of other factors.
When children are the subject of international family law disputes, the challenges are often great and emotions generally run high.  Simply put, money can be divided but children cannot.  This book is a must-have resource of any family law practitioner that wants to represent the best interests of his client and their heirs involved in a Hague case.
http://shop.americanbar.org/eBus/Store/ProductDetails.aspx?productId=252193648&term=morley
Posted by Jeremy Morley at 10:17 AM