"Abduction of Children to the United States" published in AJ Famille

The below article was recently published in the May 2016 issue of AJ Famille, a monthly publication featuring articles on all aspects of Family Law, with a French focus: 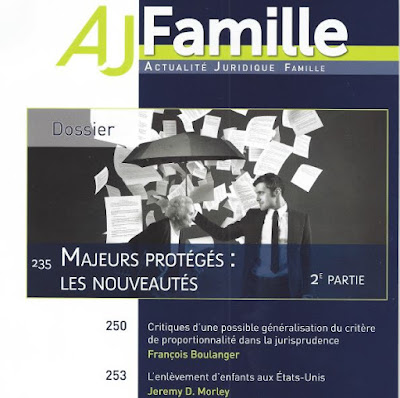 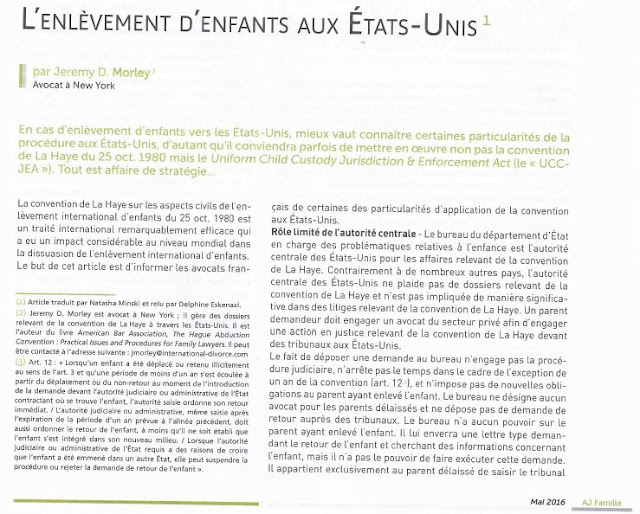 The Hague Abduction Convention in the United States
Jeremy D. Morley*
The Hague Convention on the Civil Aspects of International Child Abduction is a remarkably successful international treaty that has had a substantial impact globally in deterring international child abduction.
The purpose of this article is to inform lawyers in France of some of the distinct ways in which the Convention operates in the United States.
Limited Role of Central Authority
The State Department's Office of Children's Issues is the U.S. Central Authority for Hague cases. Unlike many other countries, the U.S. Central Authority does not litigate Hague cases, and is not involved in any significant way in Hague litigation. A petitioning parent must retain private counsel to initiate a Hague case in court in the U.S.
Submitting an application to the Office does not initiate judicial proceedings, does not stop the clock for purposes of the “one year and settled” exception to the Convention, and does not require the taking parent to take or not to take any action. The Office does not appoint attorneys for left-behind parents and does not file return petitions with the courts. The responsibility for starting a Hague case in an appropriate court rests exclusively with the left-behind parent.
One area in which the Central Authority has an important role is that it is required by Congress to prepare regular reports as to the compliance by other Hague countries with the provisions of the Convention. These reports are useful evidence in custody cases concerning whether or not a parent should be allowed to take a child for a visit to a foreign country.
Treaty Partners
The United States has not accepted as Hague Convention treaty partners all countries that have acceded to the Convention. The status of such acceptances must be checked whenever a Hague case is contemplated.
Concurrent Jurisdiction
In many countries Hague cases are channeled to a limited number of judges who have special training and experience in handling Hague cases. While the U.S. State Department has lobbied other countries to provide such training and judicial concentration in Hague cases, in the U.S. Hague cases can be brought before either federal or state judges wherever the child is located. Since there are several thousand counties and many federal judicial districts, a Hague case can be brought before any one of thousands of courts in the U.S. Most such judges have never handled a Hague case.”
Family Court judges and U.S. federal judges have completely different backgrounds. This means that the choice of the state or federal system can have a major impact on the outcome of the case. Litigants and counsel might prefer a family court judge who has experience in child custody cases or a federal judge who does not have any such experience.
In practice, the vast majority of Hague cases are brought in federal court. Petitioners often prefer to bring the case in a court that is not accustomed to applying “best interests” analyses in conventional child custody cases. Also, swift action might be more likely in a federal court, whose dockets are shorter and whose enforcement procedures are clear and forceful.
If the case is started in a state court the respondent has the absolute right to remove it to the federal court.
Application and Petition
The standard Hague application that is filed with the Central Authority need not contain much detail. The usual procedure is that the petitioner’s attorneys will then file a far more detailed petition in the appropriate court, which may be supported by documentary evidence and even by sworn affidavits. Often an ex parte motion for a protective order is filed at the same time, seeking an immediate court order barring the respondent from leaving the jurisdiction with the child and requiring that passports be deposited in court. The respondent then has a limited period of time within which to file its responsive pleading, and must appear in court at a certain time (often within just a few days) typically with the child.
Live Hearings
At the first court appearance, petitioner’s attorney will normally explain the petitioner’s theory of the case and ask the court to schedule a final hearing on the matter on as expeditious a basis as possible. The respondent’s attorney will normally advise the court at this time of the basis of the defense.
Occasionally a court might decide the case summarily based on the papers submitted by the parties but usually the court will schedule a hearing with live witnesses. The hearing date   should be well within the six week schedule called for by the treaty.
The court will also generally hear and resolve at this time any pre-hearing issues that either party might raise. Such issues may include the following: Whether pre-hearing discovery should be permitted and, if so, upon what terms; whether interim relief should be ordered, or continued if previously ordered; whether a guardian or lawyer should be appointed for the child; whether telephone or video testimony should be permitted; and whether witness affidavits should be accepted in evidence.
Discovery
Pre-trial discovery is often permitted provided it does not delay the trial. The discovery can include pre-hearing depositions (out-of-court oral testimony of a witness that is reduced to writing for later use in court), written interrogatories, and demands for the production of documents and other evidence.


Guardian / Lawyers for Child
If a respondent asserts an exception based either upon grave risk of harm to the child or on the objections of a mature child, the court mighty appoint an independent expert to help determine the facts or an independent lawyer to represent the child. Courts have sometimes appointed an attorney to act in the dual role of the “guardian ad litem” (a person the court appoints to investigate what solutions would be in the “best interests of a child”) and as the child’s attorney.


·                     Once a notice to register the foreign custody order is properly given in a U.S. court, it must be enforced unless the respondent can establish that (1) the issuing court had no jurisdiction; or (2) the foreign child custody determination was vacated, stayed, or modified by a court in the foreign country; or (3) notice or an opportunity to be heard was not given to the other parent.


·                     A case can be brought under the UCCJEA to register and enforce a foreign custody order even if the foreign country is not a party to the Hague Convention (unless its child custody laws violate human rights).


·                     The Hague Convention does not provide an effective mechanism for to enforce access rights. The UCCJEA has no such restriction.


·                     Hague cases generally raise “interesting” (i.e., expensive) issues. UCCJEA enforcement cases usually (but not always) do not. Therefore UCCJEA cases are generally substantially cheaper.
On the other hand, it could be better in some cases to bring suit under the Hague Convention, instead of under the UCCJEA, for a variety of reasons:


·                     If the courts in the child’s habitual residence act slowly it may well be far better to bring a Hague case forthwith in the place where the child is currently located.


·                     If the courts of the habitual residence will not handle the custody case’ unless and until the child is returned there, it would be possible for the left-behind parent to wait until the U.S. court has custody jurisdiction, usually after six months, and then to sue for custody in the U.S. state where the child is located. In such a situation, however, a Hague case would invariably be a far wiser course, since it would be much quicker and it would not open the door to a full-blown best interests analysis.


Conclusion
Hague cases are handled differently in the U.S. than in other countries. The Convention generally works well but it requires strategic implementation and expeditious implementation. In some cases it is better to proceed under the UCCJEA.
*Jeremy D. Morley is a New York lawyer who handles Hague Convention throughout the United States. He is the author of the American Bar Association book, The Hague Abduction Convention: Practical Issues and Procedures for Family Lawyers. He may be reached at jmorley@international-divorce.com
Posted by Jeremy Morley at 8:20 AM