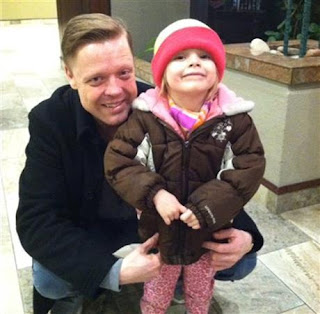 In this March, 2013, photo provided by Stacey Warren, the Des Moines attorney representing Magnus Anderung, is Magnus Anderung with his daughter. The 3-year-old girl that was the center of an international custody dispute between her divorced father living in Sweden and her mother, Raina Anderung, who brought her to Iowa, is boarding a plane to return to Sweden as ordered by a federal judge. Riana Anderung said the her daughter boarded a flight departing Des Moines Wednesday, July 17, 2013, with her father. (AP Photo/Stacey Warren)

DES MOINES, Iowa (AP) — A 3-year-old girl at the center of an international custody dispute boarded a plane to Sweden on Wednesday after a federal judge ruled that her mother was violating a treaty by keeping her in Iowa.

Linnea Anderung left on a morning flight from Des Moines with her father, Magnus Anderung, said attorney Stacey Warren, who represented the father in the federal case. Anderung's ex-wife and Linnea's mother, Raina Anderung, did not leave with them.

Magnus Anderung filed a lawsuit in February in Iowa alleging that his ex-wife never returned after leaving Sweden in May 2012 on what was supposed to be a 90-day visit to see her mother in Pleasantville, a small town about 30 miles southeast of Des Moines.

A federal judge sided with him in May, ruling that Raina Anderung had wrongfully kept their daughter in the U.S. since last August in violation of the 1980 Hague Convention on the Civil Aspects of International Child Abduction. The treaty, which outlines child custody rules between countries that sign the agreement, was signed by the U.S. in 1988 and by Sweden in 1989.

Warren said the parents met a couple of times in the past week, together with Linnea, to make the transition easier for her. She has not lived with her father in more than a year, although he had come to Iowa to see her and to await the outcome of the court fight.

"He has been in Des Moines for 118 days, waiting to board a plane with his child and go home," Warren said. "His life, which has been on hold for the entire time, can finally resume and Linnea will be able to celebrate her fourth birthday at her home in Sweden."

Raina Anderung said that her daughter was upset at having to leave her mother and clung to her. She said her ex-husband had agreed to allow her and their daughter to move to Iowa, but Magnus Anderung denies that claim. She said she's now in debt from paying for her attorney but that she will continue to try to get custody of her daughter. She said parting with her daughter was "terrible, traumatic and a travesty" for the girl.

U.S. District Court Judge James Gritzner issued a ruling last month ordering the mother for the second time to return her daughter to Sweden. The judge argued that Raina Anderung had taken her daughter from the only country where the girl had ever lived.

Gritzner allowed the mother to appeal but ultimately found that none of the new evidence she submitted was compelling enough to overturn his earlier ruling. He said allowing further delays wouldn't be fair to the girl's father, who has been staying in Iowa because of the custody fight. He said Raina Anderung had the option of returning with her daughter to Sweden, where her father now has sole custody.

The parents had joint custody in Sweden before Raina Anderung left the country. After the Iowa judge's May ruling that ordered the child be return to Sweden, Magnus Anderung filed for a modification of their custody agreement in a Swedish court.

Under the international treaty, custody is decided in the nation from which it originated.