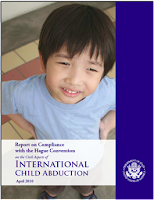 The U.S. State Department has just issued its latest "Report on Compliance" with the Hague Abduction Convention.

Astonishingly it lists three countries as not compliant (Brazil, Honduras and Mexico) but it lists just one country - Bulgaria - as "Demonstrating Patterns of Noncompliance."

This is a sharp departure from past practice when it listed about eight countries in the latter category.

Does this mean that our treaty partners are becoming more compliant with the terms of the treaty? Or that the State Department is backing off from criticising other countries in this regard?

I wish it were the former but suspect that it is the latter.
Posted by Jeremy Morley at 2:38 PM