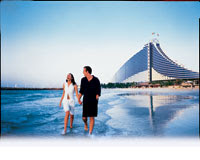 A British woman arrested in Dubai for sex outside marriage after making a rape complaint hopes a hasty wedding to her fiance will result in her being freed, British papers say.

The 23-year-old said she was raped by a waiter at a hotel where she was celebrating her engagement to her 44-year-old boyfriend on New Year's Eve.

But when the London couple reported the alleged rape to police, they were arrested for having sex outside marriage and being drunk outside licensed premises, the Guardian said.

The couple, Muslims of Pakistani origin, spent two days in jail and have had their passports confiscated to prevent them leaving until their court case. But the Daily Mail reports the woman has been told that she must drop the rape allegation, admit to being drunk and marry her fiance if she wants to return to Britain.

The British Embassy planned to marry the couple within weeks in the hope lawyers would drop the charges, the Mail said.

"I always dreamed of a big family wedding in Britain, but now I just want to get married so I can get out of here," the 23-year-old is quoted as saying in the The Sun. "I've done nothing wrong but I'm petrified of rotting in jail."

The woman told British papers she felt Dubai authorities were being tougher on her because she was a Muslim. "Sex outside marriage and drinking alcohol are illegal but police are normally lenient with white, non-Muslim foreigners," the Mail said.
Posted by Jeremy Morley at 6:02 PM