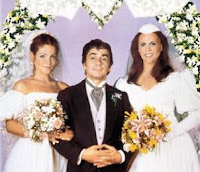 Problems arising from void or voidable marriages often do not create issues until many years after the fact and in quite expected ways.

Such was the experience of one Kanadi Mohamed Ali, an Israeli citizen whose conviction for knowingly making a false statement under oath relating to naturalization, citizenship, or registry of aliens in violation of 18 U.S.C. § 1015(a) has just been upheld by the Sixth Circuit.USA v. Ali.

Defendant married Wife #1 in Montreal, Canada. After they separated the Montreal Superior Court mailed him a “Declaration” of divorce written in French. He later claimed that he thought it was a divorce judgment but it was apparently merely a pleading in a divorce case. He then married Wife #2 in Georgia, USA. Subsequently the Montreal Superior Court entered a “Judgment of Divorce” finalizing the divorce between Ali and Wife #1 and Ali then remarried Wife #2 in Tennessee.

Seven years later Ali applied for naturalization. A question on his application form, in a section entitled “Good Moral Character,” asked, “Have you ever: . . . [b]een married to more than one person at the same time?” He answered “no”.

In a handwritten attachment to the application, Ali disclosed his marriage and divorce to Wife #1 and his second marriage to Wife #2 in Tennessee but he did not mention his first “marriage” to Wife #2. When charged with making a false statement he asserted that under Georgia and Tennessee law, his first attempted marriage to Wife #2 was void ab initio and that, therefore, he was never actually “married” to her while still married to Wife #1. The Sixth Circuit held that although the first purported marriage to the second wife was indeed void ab initio under both Georgia and Tennessee law, a truthful person would not have answered “no” to the question. Furthermore, Ali’s asserted defense would nullify all criminal bigamy laws by giving a defendant charged with bigamy a foolproof defense – that he could not have, as a matter of law, committed bigamy because his attempted second marriage was automatically void.

Seems harsh to me but it serves as a warning who take these issues too lightly. Likewise, people who obtain a Dominican divorce even though neither they nor their spouse is domiciled in the Dominican Republic often feel that they have “beaten the system” only to discover years later that they have a serious problem when they cannot establish that they are divorced and they wish to re-marry or apply for a spousal visa.

Posted by Jeremy Morley at 1:31 PM